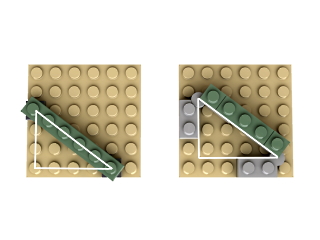 If you look at a LEGO baseplate, you will see that the studs on it are arranged in a regular grid with any two neighboring studs exactly 0.8 cm apart (measured center to center). However, this is true only if you are measuring the distance parallel to one of the sides of the baseplate. If you were to measure the distance between two studs that are next to each other diagonally, the distance would be slightly longer (√2 x 0.8 = 1.414 x 0.8 = 1.13 cm to be exact). Herein lies the problem – you can place bricks every which way on the baseplate as long as they are parallel to one of the sides of the baseplate. But as soon as you turn the bricks to an angle different from 0 or 90 degrees, the studs no longer line up.

The trick to placing bricks at a different angle (with good stud connections at both ends) is making sure the triangle you form satisfies the Pythagorean Theorem. Most people haven’t encountered this since high school math, but it basically states that in a right angled triangle, a2 + b2 = c2 where a and b are the adjacent sides that make up the right angle and c is the hypotenuse (or the longest side that is opposite to the right angle). The smallest Pythagorean triple (set of 3 numbers that satisfy the theorem) is 3, 4 and 5 (and that is because 32 + 42 = 9 + 16 = 25 which is equal to 52).

How does this Pythagorean triple (3, 4, 5) translate to LEGO ? Basically, if you place your brick or plate at an angle such that it forms a triangle (3 studs long on one side and 4 studs long on the other), then the studs at the two ends of your brick or plate (but not the ones in the middle) will line up perfectly with the studs directly below. Then, does it make sense that we are using a 1 x 6 plate in the first picture ? Yes, when you consider the fact that the sides of our triangle actually intersect at the centers of the studs, the distance that matters is between the studs at the two ends of the 1 x 6 plate which is 5 studs. The same applies to the other two sides. However, when we use hinge plates to create our triangle, the longest side has 5 studs instead of 6 (because the sides of the triangle now intersect at the corners of our plates).

I happened to use 5, 5, 7 to create the angled corners in the base of my model of the Hearst Tower.

I used angled walls extensively in my model of the Tribune Tower. Here the main tower used 5, 5, 7 for the angled corners. For the octagons in the crown, I used 7, 7, 10 (for the smaller one) and 8.5, 8.5, 12 (for the bigger one) to create the angled sides. The flying buttresses also needed to be attached at an angle (though not 45 degrees) and for that I used another triple that was close enough – 4, 7, 8. 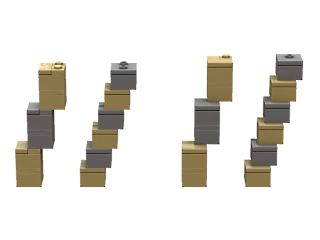 When you are building with LEGO, you are always working with a grid of possible locations where you can place your bricks. For each layer of bricks you place, this grid is determined by the layer immediately below it. All the locations in this grid are separated by increments of a stud (which is the width of the basic LEGO unit – a 1 x 1 brick). For instance, if your first layer is a 32 x 32 baseplate, the bricks in your second layer have to be placed such that their studs line up vertically with one or more of the 32 x 32 studs in the baseplate.

Say you are stacking bricks to build a tower that is supposed to taper as it rises. The smallest amount you can normally set back a layer of bricks relative to the layer below it is a single stud. Depending on the scale you are using for the tower, a full stud setback at each step may not give you as smooth of a taper as you would like. What if there was a way to set your bricks back by just half a stud instead of a full stud ? Fortunately there is a way, and that is using jumper plates. These are plates that have studs located halfway between where the studs would normally be, on a regular plate. They allow bricks to be offset by half a stud in one or both dimensions.

I did something similar in my model of 70 Pine Street. Here, jumper plates were used to create recessed windows as well as for the taper at the top portion of the building that culminates in the spire.

Three of my skyscraper models (Transamerica Pyramid, John Hancock Center and Vista Tower) use half stud offsets extensively to create tapers that stretch the entire length of each building. One complication with half stud offsets is that the edges of your bricks are no longer in a straight line and so, if the portion of your wall that uses half stud offsets needs to meet a regular wall, you are left with ugly gaps. I had this issue on my model of the Transamerica Pyramid where the “wings” of the building intersect the main tower. I ended up using tiles attached to the wings to plug these gaps as best as I could.

In the case of the John Hancock Center, I had to deal with a different kind of issue. Based on the dimensions of the real building, I realized that the wide and the narrow side of the model needed to be tapered by different amounts in terms of studs. So I couldn’t simply use the 2 x 2 jumper plates like I did on the Transamerica Pyramid. I had to use a mix of 1 x 2 jumper plates (oriented lengthwise or widthwise) along with 2 x 2 jumper plates to taper the model by one stud (half stud on each side) every 6 floors (on the long side) and every 8 floors (on the short side). 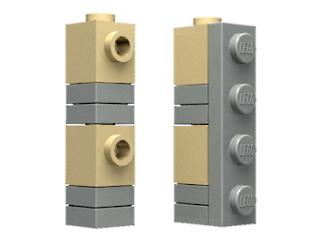 Did you know that my skyscraper builds have taken a lot of hard work ? In fact, you have no idea all the blood, sweat, tears and SNOT that went into them ! Sorry I couldn’t resist, but SNOT here refers not to a bodily fluid but a LEGO building technique (it stands for “Studs Not On Top”). Who came up with these LEGO acronyms anyway ? From AFOLs to MOCs to SNOT, the acronyms used by the LEGO community are anything but elegant, but I guess we are stuck with them for now.

Anyway, SNOT refers to a technique where, in addition to stacking LEGO bricks, plates and tiles the normal way (one on top of the other) we are also turning them on their sides and attaching them to the faces of other bricks. As the LEGO system has evolved over the years, more and more elements have been added to the LEGO catalog that are designed to facilitate this – especially bricks that have studs not just on the top but on their sides as well. Here are examples of some SNOT elements that I have found to be very useful.

SNOT is not as straight-forward as it sounds and the reason is the geometry of LEGO bricks. A basic 1 x 1 brick has a footprint of 0.8 cm x 0.8 cm and a height of 0.96 cm. In other words although the footprint of a brick is a perfect square, it is taller than it is wide. If we use a plate (0.32 cm high) as a unit of measurement, a brick is exactly 3 plates high but only 0.8 / 0.32 = 2.5 plates wide. A stack of two bricks would be 6 plates high but a 1 x 2 brick turned on its side would only be 5 plates high. To match the height of the 1 x 2 brick turned on its side, we would instead need a stack of 1 brick (3 plates) and 2 plates. This 2 studs = 5 plates equation is something that always comes into play with SNOT.

I cannot possibly cover all the different applications for SNOT here, but I can give some examples from my own skyscraper builds where it would not have been easy for me to achieve a certain detail or shape without using SNOT.

My first example is some simple SNOT I used for the base of the Empire State Building. Here I wanted the windows to be slightly recessed compared to the walls and an easy way to achieve that is by attaching tiles to the wall sections between the windows. With the 1/230 scale I was using, I needed each floor to be 5 plates high anyway and this was perfect for SNOT. I had layers with bricks sandwiched between layers with plates. I used the 1 x 1 modified bricks with two adjacent studs in the corners and 1 x 1 modified bricks with single studs everywhere else and attached 1 x 6 tiles to the wall sections between the windows to achieve the recessed windows effect.

It was a little trickier to create the same effect on the base of my model of the Hearst Tower. Here the scale is bigger (1/156) and calls for 7 plates per floor. To be able to attach 1 x 8 tiles to the faces of the wall I needed to somehow get the studs on the faces of the walls to be 5 plates apart even if each floor was 7 plates high. I ended up having to mix bricks and plates within the same layer (so to speak) to achieve this.

Next we look at a more complex example of SNOT. I couldn’t think of an easy way to recreate the curves of the crown of the Chrysler Building. Simply stacking bricks or plates would have created a very blocky structure and I knew I had to find a way to incorporate some curved slopes pieces which have smooth curved surfaces. After quite a bit of experimentation using LEGO graph paper, I figured out a way to do each of the 6 arch panels (of varying sizes) using a combination of regular bricks and plates as well as their SNOT counterparts with studs on their sides, in addition to tiles, brackets, etc. I also found a way to join these panels together to create a sturdy structure for the crown that would hold together without any glue.

My last example is another tricky roof – this time it’s the roof of 40 Wall Street. Again, there was no easy way to build the green pyramidal roof of this building just by stacking bricks or plates. I figured I would need to build the green roof panels entirely out of plates and have them angled using hinges. Each roof panel was exactly 30 plates wide so that it could be attached to the base that was 12 studs wide. Also each panel was built in two halves (with studs facing opposite directions) that were joined together using SNOT.