My daughter who helped me build my custom model of the Empire State Building also happened to build the most recent official version (set 21046). She built it all by herself which is quite an accomplishment for an 8 year old (especially given all the complex SNOT techniques that this set uses).

LEGO had previously released a much smaller stand-alone version (set 21002) which was just 7-8 inches tall and devoid of any details (I personally find it to be one of the most disappointing sets in the Architecture series). There was another version of the Empire State Building in the New York skyline set (21028) that LEGO released. This used the 1×2 grille tiles to add a little more detail but the scale was about the same as what was used on the original set. I am happy to report that the new set (21046) leaves the previous two versions in the dust. It is amazing how accurate the designers of this set managed to make it at such a (relatively) small scale. The very clever SNOT techniques used to clad the facade of the model with 1×2 grille tiles make the building process very interesting (albeit a bit tedious).

After watching my daughter build the 21046 set, I was tempted to do the same digitally. I took the opportunity to build all 3 official versions in stud.io so I could compare them to each other and also to my much bigger custom version. 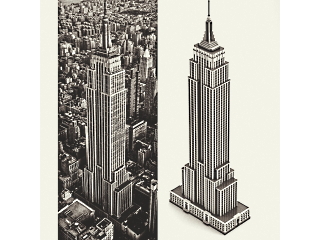 A true test of the accuracy of a LEGO model is putting it up against a picture of the real building to see how well it holds up in comparison. I have tried this with a couple of my models (using digital renders that match the real pictures as closely as possible in terms of the angle of the shot and lighting). Here are the results 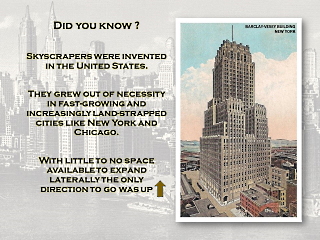 Here are some slides I put together for a LEGO convention where I displayed some of my models. They briefly cover the history of the skyscrapers of New York – most of the information contained in these slides was gleaned from Wikipedia and other sources on the internet.