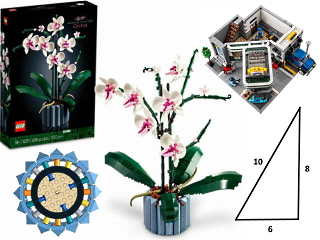 Every so often we come across a technique used in an official LEGO set or a MOC that leaves us scratching our heads. Surely there must be a good explanation for how that technique works, but it isn’t always readily apparent. As it turns out, there is usually some math involved and my goal with this series of posts is to try to delve into the math behind LEGO techniques. The first post in this series can be found here.

In April 2022 LEGO announced two new additions to their Botanical Collection line. I will be talking about one of them (10311 Orchid) in this post. What kind of math could possibly be involved in a set with flowers anyway ? The answer of course lies in the vase. At first glance it almost seems miraculous how the fluted vase is put together with its perfectly round shape and double slopes attached on the outside with nary a gap to be found between them.

The vase was the first thing that caught my eye when I saw the announcement for the Orchid set (although I have to admit that the rest of it is pretty neat too). It is not always easy to create round shapes using LEGO (I have covered a few different ways here). The designer of the Orchid set (Mike Psiaki who is also responsible for the Titanic and Apollo Saturn V sets among others) has come up with a very clever way that relies on the mathematical properties of the 8×8 round plate which we will now examine.

16 technic 1×7 liftarm pieces can be attached to these technic pins allowing us to then attach the double slope pieces needed to create the fluted appearance. Notice that with the 4×4 macaroni tiles added on the top, the height of each layer is 5 plates and this ensures the correct vertical spacing between the technic pins when the layers are stacked (5 plates as we know from the basic SNOT equation is equivalent to 2 studs).

Why do we even need the liftarm pieces ? Why not use SNOT bricks instead of the technic bricks and attach the double slope pieces to them directly ? We again need some math to help explain this. The diameter of the 8×8 round plate is 8 studs or 20 plates. With the liftarm pieces (which are 1 stud thick) attached on both sides, the total diameter becomes 20+2.5+2.5=25 plates.

The circumference of the core is now π x 25 = 78.5 plates. Now divide that by 16 and you get 4.9 plates which is very close to the 5 plate (2 stud) width of each double slope piece. Now we see how the liftarm pieces help make the inner core just large enough to attach the double slope pieces all around with almost no gaps showing between them.

Speaking of turntables, they have also been used in multiple official sets to build angled walls. An example is the Spring Lantern Festival set (80107) where 4×4 turntables are used to attach an arched footbridge at an angle over a koi pond.

Even when we are using turntables to create an angled wall (or a structure attached at an angle, as in this example), we are essentially creating a right angled triangle that satisfies the Pythagorean Theorem (which I have covered in more detail here). The sides of this triangle intersect at the axes of rotation on the turntables (the center points of top plates). The Pythagorean Triple used in this case is (6,8,10).

As we have seen here, we don’t have a lot of options to choose from if we just limit ourselves to Pythagorean Triples. Most applications of the Pythagorean Theorem use the smallest and most common triple (3,4,5) as in the Boutique Hotel set covered here or a multiple like (6,8,10) used in the Spring Lantern Festival set.

However in certain situations, it is possible to fudge the math a bit and get away with a triple (set of 3 numbers) that is not a Pythagorean triple strictly speaking, but is close enough for practical purposes. I like to call these “near triples”.

When we create angled walls using “near triples”, it is always a good idea to use elements like hinges that naturally have a little bit of wiggle room. This minimizes the strain that you are putting on the LEGO elements when you make the connections for the angled section.

I have used “near triples” like (5,5,7) and (7,7,10) often in my builds and some of these have the added advantage of allowing us to create walls at 45 degree angles (which is not possible with Pythagorean Triples). I wasn’t aware of any official sets that used “near triples” until I looked through the instructions for the Corner Garage 10264 modular set that LEGO released in early 2019.

One notable aspect of this modular is that a large part of the front façade of the garage is built at a 45 degree angle. There is also an awning above a gas station island that is attached perpendicular to that façade (and ends up being at a 45 degree angle relative to the base).

If we think of this as the hypotenuse of a right triangle, the other two sides would each be 12 studs long (if you picture horizontal and vertical lines drawn along the LEGO grid from the studs at the two connection points, they would intersect at a stud that is 12 studs away in each direction).

Now, (12,12,17) is not a Pythagorean triple strictly speaking. But the length of the hypotenuse in a right triangle where the other two sides are 12 is √(122 + 122) = 16.97 which is close enough to 17. The 1×2 rounded plates act like hinges and provide a firm connection while allowing a little bit of wiggle room.

“Near triples” also come into play in the way the awning is attached at a 45 degree angle (relative to the baseplate). But it is a little less obvious how the math works here. Taking a closer look, we see that the awning is 16×10 studs wide with rounded corners. It is attached to the angled wall of the garage using a hinge assembly consisting of a 1×3 tile with 1 finger on top (attached to the angled wall) and a 1×2 brick with 2 fingers (which is incorporated into the awning itself).

The awning is supported by two vertical posts that are created using technic axles and axle connectors. These posts connect the awning to the gas station island but the island itself is connected to the base in just one spot. There is a good reason for that.

The gas station island has two 4×4 round plates that are 6 studs apart (center to center) but there is no way to connect both these at a 45 degree angle given that there are no “near triples” with 6 as the biggest number. So the designers chose to connect one side of the gas station island to a 2×2 tile with a hole (this attaches to the bottom of the 4×4 round plate to form a turntable) and leave the other side unconnected (it simply rests on the 2×2 black turntable base).

We can look at the side that actually has a connection and try to figure out the math that is involved. The connection point is exactly 13.5 studs from the line connecting the ends of the angled façade. This can be broken up into two “near triples”. First, we start with the right triangle representing the original “near triple” (12,12,17).

If we draw a line from the vertex (corner) opposite the longest side (or hypotenuse) so it intersects the hypotenuse at a right angle, we would get two identical right triangles with dimensions (8.5,8.5,12). This is also a “near triple” and so we can think of 8.5 out of 13.5 to be one of the legs (shorter sides) of this smaller right triangle. The remaining 5 is the hypotenuse (longest side) of another “near triple” (3.5,3.5,5). Pretty cool, right ?

One of the best things about LEGO is that there are literally an infinite number of ways in which you can put pieces together to create a model. There’s usually some trial and error involved in designing a model and you may stumble upon certain techniques that work surprisingly well, even if you are not cognizant of the underlying math.

It is quite fascinating (at least for me) to try to understand why something works the way it does. I am hoping that this series of posts ends up piquing your interest as well. If there is any particular technique in an official set or MOC that you would like me to cover in a future installment of this series, please be sure to let me know in the comments section.

2 thoughts on “The Math Behind LEGO Building Techniques – Volume 2”