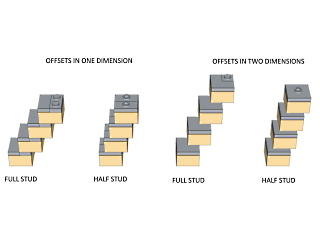 What are half stud offsets and why do we need them ? Before we get into that, let’s start with the basics. A stud is not just the bump you see on the top of a LEGO piece that allows you to connect it to other LEGO pieces. It is also a unit of measurement representing the distance between two adjacent bumps (or knobs) on a LEGO piece (measured center to center). The basic building block of the LEGO system is a 1×1 brick which is exactly 1 stud wide and 1 stud deep (though it is a little taller than 1 stud). A 2×4 brick is 2 studs wide and 4 studs deep. All basic LEGO pieces (bricks and plates) have footprints that are multiples of 1 stud.

When you build with LEGO, you can only place each piece such that its studs (bumps) line up with the studs on the layer that is immediately below. If you start with a 32×32 baseplate, you are limited to a 32×32 grid of possible locations where you can place the pieces in your next layer and these locations are separated by increments of 1 stud (the measurement unit). Say you are building a wall where a section needs to be recessed. The smallest amount you can normally set the recessed section back is one stud. If you are looking to create a more subtle effect, would it be possible to set the recessed section back by just half a stud instead of a full stud ? Yes, and that is exactly what jumper plates allow you to do.

A 1×2 jumper plate (part 15573) has a single stud that is located exactly halfway between where the two studs on a regular 1×2 plate would be located. You can use it to set back (or offset) your wall section by half a stud as shown in the picture below.

Half stud offsets in one and two dimensions

While a 1×2 jumper plate allows you to create a half stud offset in one dimension (either front to back or sideways), you can do the same in two dimensions using a 2×2 jumper plate (part 87580). This jumper plate has a single stud exactly in the center of where the 4 studs on a regular 2×2 plate would be located.

As we have seen, the 1×2 jumper plates are perfect for setting back sections of a wall or a window by half a stud to add more subtle detail. You may need another set of jumper plates above the window (a second half-stud offset to counter the first one) to get back to the normal alignment of the studs as you continue to build the wall above the window.

Here are examples of half stud offsets from two of my skyscraper models. In the case of the Empire State Building, I used jumper plates to create recessed wall sections at the top of the building.

I did something similar in my model of 70 Pine Street. Here, jumper plates were used to create recessed windows.

Centering elements with odd vs. even number of studs

In the digital model of the Blue Mosque that I built, I needed to have 3 smaller arched window openings inside a bigger arch. I used jumper plates to center the 3 smaller arches (with a total outside dimension of 7 studs) inside bigger arch with an opening that is 6 studs wide.

An obvious application for jumper plates is to help achieve smoother tapers than is possible with regular bricks and plates. Like many of the other skyscrapers built during the early 1930s, the Empire State Building and 70 Pine Street have top sections that taper as they lead up to their spires. I used 2×2 jumper plates for the tapers in my models of these buildings.

My models for other buildings like the Transamerica Pyramid and John Hancock Center required more extensive use of half stud offsets given that the entire buildings have tapered shapes.

The Transamerica Pyramid in San Francisco is a skyscraper with a square base that gradually tapers to a point at the top. Based on the scale I was using, I needed to taper the model from 28 studs to 7 studs over 42 floors. With regular bricks and plates, the smallest amount I would have been able to taper the model is 2 studs (one stud on each side) approximately every 4 floors. Using 2×2 jumper plates I was able to taper the model by just one stud (half stud on each side) every 2 floors. This definitely minimized the jaggedness and resulted in a smoother taper.

However, there is one downside to using half stud offsets and this became apparent on the model of the Transamerica Pyramid. The pyramid of this building is flanked by “wings” on two sides which are structures that hold the elevator shaft and stairwell. In my model, the wings needed to rise vertically without any tapers and this meant I would have normal wall sections intersecting the pyramid walls that are tapered using half stud offsets. In this situation, half stud gaps are unavoidable (because the bricks that make up the tapered pyramid are no longer in a straight line vertically). As you can see in the picture below, I did my best to plug these gaps by attaching tiles to the “wings”.

Tapering by unequal amounts in the two dimensions

My LEGO model of the John Hancock Center in Chicago presented a different kind of challenge. In order to accurately represent the proportions of the real building, I needed to taper the wide and the narrow sides of the model by different amounts in terms of studs. So I couldn’t simply use the 2×2 jumper plates like I did on the Transamerica Pyramid. I had to use a mix of 1×2 jumper plates (oriented two different ways) along with 2×2 jumper plates to taper the model by one stud (half stud on each side) every 6 floors (on the long side) and every 8 floors (on the short side).

Here’s a breakdown showing the offsets needed (or not) at each floor to achieve this unequal taper in the two dimensions (X and Y).

Other uses of jumper plates

One other interesting thing about jumper plates is that they have “open” studs that allow plates and bricks to be attached on the top without any offsets. So why even bother using jumper plates ? The answer is “clutch power” or the ability of a LEGO piece to hold together tightly to the piece it is attached to. Given that a 1×2 jumper plate has just 1 stud on the top and two anti-studs (or receptacles for studs) on its underside, means that it has higher clutch power on the bottom than it does on the top. This makes it very useful in big models that have multiple sections that need to be put together and taken apart easily. The jumper plate tends to stay attached firmly to the layer below it while allowing the layer above to be separated without much effort. I tend to mix in jumper plates with tiles at the seams between the different sections that make up my skyscraper models (and I have never had to worry about loose pieces coming off while taking the sections apart).

Here’s an example showing the seam between the base in my model of the Empire State Building and the section above it. You can see a sprinkling of jumper plates among the tiles and these allow the section above to be held in place but separated from the base easily.

SNOT with half stud offsets

This SNOT technique doesn’t use jumper plates but I decided to include it here anyway. It makes use of the Technic 1×2 brick with 1 hole (part 3700). You can insert a Technic pin (part 4274) in the hole to create a “stud” and then use SNOT to attach tiles and other elements to the faces of the Technic 1×2 bricks. The tile is essentially offset by half a stud relative to the stud locations on the Technic bricks and helps add subtle detail.

You can see this technique used in the top section of my model of the Empire State Building along with some of the other techniques we covered earlier.

So the next time you build something using LEGO, don’t underestimate those lowly jumper plates. You just don’t know when or where they may come in handy. If you have any other applications for jumper plates that I have not covered here, please feel free to post a comment. Happy Building !