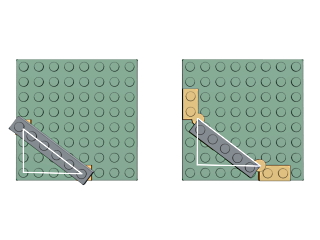 How many different ways can you attach a 1×6 brick to a baseplate ? There are quite a few as you can imagine, but each time the studs of the brick have to line up with the studs of the baseplate under it. That is just how LEGO works. The studs on the baseplate are in a regular square grid and therefore you can only place your 1×6 brick such that it is parallel to one of the sides of the baseplate. Suppose you are building a castle out of LEGO and one of your walls needs to be at a 45 degree angle, are you out of luck ?

Remember the regular square grid I mentioned earlier ? If you take any stud on the baseplate, it is exactly the same distance away from each of its neighbors on all 4 sides and that distance happens to be 0.8 cm (or a “stud” which is also the basic unit of measurement in LEGO). But the studs in the 4 corners are farther away (the distance is √2 x 0.8 cm = 1.414 x 0.8 cm = 1.13 cm to be exact). That is because in a square, the 4 sides are of equal length but the distance between any two opposite corners is a little longer. Similarly, the distance between any two studs measured at any angle other than 0 or 90 degrees is not guaranteed to be a whole number of studs.

So how can we turn our 1×6 brick to a different angle and still have it attach firmly to the baseplate ?

If you jog your memory back to high school math (if you haven’t gotten there yet, you will just have to take my word for it), the equation a2 + b2 = c2 may seem vaguely familiar. That is the Pythagorean Theorem that defines the relationship between the sides of a right angled triangle.

Let’s take a closer look at where the two 1×1 plates were placed on the baseplate. If we count along the two sides of the baseplate starting from the corner, we see that the 1×1 plates are 3 and 4 studs away from the corner stud and make up two sides of a right angled triangle. Our 1×6 brick is placed along the third (and longest) side, also known as the hypotenuse. The triangle we created satisfies the Pythagorean theorem because 32 + 42 = 9 + 16 = 25 which is equal to 52. Then, does it make sense that we used a 1×6 brick for the longest side ? Yes, because the three sides of the right angled triangle intersect at the studs and the distance that really matters is the distance between the studs at the two ends of the 1×6 brick which is 5 studs.

So the bottom line is that for any brick or plate to be placed at an angle other than 0 or 90 degrees, you need to make sure the resulting triangle satisfies the Pythagorean theorem. Any set of 3 numbers that satisfies this theorem is called a Pythagorean triple and (3, 4, 5) is the smallest such set made up of whole numbers. What are some other Pythagorean Triples ? Listed below are all the Pythagorean Triples with numbers less than or equal to 25. As you can see, there are not many with practical applications in LEGO builds.

If we were to use the method described earlier to build angled walls, there is just no good way to avoid gaps at the corners where the angled wall segments meet the regular wall segments placed along the LEGO grid. An alternative is to use hinge elements.

There are many different types of LEGO hinge elements but the ones we need for angled walls are the ones that swivel – specifically the 1×4 hinge plate that consists of a 1×2 swivel base and a 1×2 swivel top.

The 1×2 plates that make up each of the two halves of the hinge plate are joined at their corners by a hinge that allows the angle between the plates to be changed from 0 to 180 degrees. If you place two 1×4 hinge plates as shown below, you can bridge them with a 1×5 plate (yes, LEGO makes one now !) attached at the top.

An example of a LEGO official set that uses the (3,4,5) triple extensively is the Boutique Hotel set (10297). Here you can find not one but 6 separate (3,4,5) triangles used to create the angled walls that give the building its unique triangular shape. More details can be found here.

Turntables give us another way to create angled walls and this technique has been used in multiple official LEGO sets. An example is the Spring Lantern Festival set (80107) where 4×4 turntables are used to attach an arched footbridge at an angle over a koi pond.

Even when we are using turntables to create an angled wall (or a structure attached at an angle, as in this example), we are essentially creating a right angled triangle that satisfies the Pythagorean Theorem. The sides of this triangle intersect at the axes of rotation on the turntables (the center points of top plates). The Pythagorean Triple used in this case is (6,8,10).

Near Triples (When close enough is good enough)

The angled wall we built earlier can probably pass for a 45 degree wall but if you take a closer look at it, the smaller angle is more like 37 degrees. A right-angled triangle with a 45 degree angle is called a special right triangle because the third angle also ends up being 45 degrees (the three angles in a triangle have to add up to 180 degrees). This also means that the two sides that make up the right angle have to be of equal length. None of the Pythagorean triples we have seen, has two smaller numbers that are equal. So is it really possible to achieve a 45 degree wall using LEGO ?

Thankfully, the little bit of give that hinge plates have, allows us to use numbers that are close enough to Pythagorean triples. Consider for instance (5,5,7) and (7,7,10) which are “near triples” that allow you to build LEGO walls at 45 degree angles as shown below.

Official sets have also used “near triples” such as the Corner Garage set (10264) that uses (12,12,17) to create the part of the main façade that sits at a 45 degree angle. You can find more details here.

The Hearst Tower in New York is a wonderful example of a skyscraper that combines old and new architectural styles. It preserves the façade of the original 6-story Art Deco building as its base and adds a modern glass tower on the top. Two of the corners of the base are chamfered and I needed to build 45 degree walls for those two corners. Based on the scale I was using, I needed the angled wall section to be about 7 studs wide. This was a perfect application for the “near triple” (5,5,7).

One of the modern wonders of the world, the Taj Mahal in Agra, India is probably one of the most well known masterpieces of Islamic Architecture. The main structure in the Taj Mahal is a mausoleum that sits on a raised platform. The mausoleum is shaped as a cube with four truncated corners that create the shape of an unequal octagon. To create the chamfered corners in my LEGO model, I used another “near triple” (7, 7, 10).

One of the most beautiful skyscrapers in the world – the Tribune Tower in Chicago was inspired by Neo-Gothic architecture. Its highly ornate crown complete with flying buttresses was designed after the Butter Tower of the Rouen Cathedral in France. My LEGO model of this building required not one but several different types of angled walls. For the chamfered corners of the main tower I used the “near triple” (5,5,7). The two levels of the octagonal crown used two near triples – (8.5, 8.5,12) and (7,7,10) and the flying buttresses were attached to the base of the crown using another near triple (4,7,8).

This article would not be complete without at least a mention of a few other ways of building angled walls using LEGO. The techniques we have seen so far create angled walls by placing elements along the hypotenuse (angled side) of a right-angled triangle. But for this to work, the length of the hypotenuse has to be a whole number of studs and this limits our options to Pythagorean triples and near triples.

There are a few other techniques where we don’t actually place any elements along the hypotenuse and can therefore disregard its length. This opens up quite a few other possibilities …

Let us start with an arbitrary right triangle – say the sides that make up the right angle are 6 studs and 2 studs long. The length of the hypotenuse (angled side) would be √(62 + 22) = 6.32 studs which is not a whole number. It is not possible to place a LEGO element along this side, but if we mirror the right triangle along the hypotenuse, we can create an angled wall by placing LEGO elements along the other two sides of the second triangle. We will need to use hinge plates to join the two mirrored right triangles together.

A more common application of the mirrored hypotenuse technique uses wedge plates to create the two mirrored triangles. The 6×3 wedge plates create triangles that are equivalent to the ones from my earlier example (where the numbers I picked were not so arbitrary, after all). This technique is used to create angled sides in the floor and roof sections of the Boutique Hotel set (10297). You can find more details here.

The neat thing about Pythagorean quadruples is that they can be used to place elements at an angle not just in 2 dimensions but in 3 dimensions as well. Credit goes to hafhead on Flickr for the idea.

The diagonal distance between two studs on a plate may not be a whole number of studs. But if you take a rectangular plate, the distances between the two pairs of studs at opposite corners (1, 3 and 2, 4) are exactly the same. So you can rotate the plate and attach it such that its corners 2 and 4 line up with where the corners 1 and 3 normally would be. Once again you will need to use 1×1 plates as spacers.

If you think of 1-3 and 2-4 as the longest sides of two identical right angled triangles that are mirrored, all you are doing is rotating one of the triangles so that the longest sides are lined up. The angle of rotation would obviously depend on the size of the right angled triangle (the number of studs on the two sides that make up the right angle). It turns out that the closest you can get to a 45 degree rotation is by using a 4×8 plate.

This technique can also be extended to include hinge elements. It looks a little different because this time the diagonals that are switched go all the way to the corners of the plates.

I am sure there are several other ways to create angled walls that I have not been able to cover here. I am hoping the overview I have provided at least points you in the right direction for your own exploration of these techniques. Please let me know if there are other techniques you have used that merit an inclusion here. Happy building !