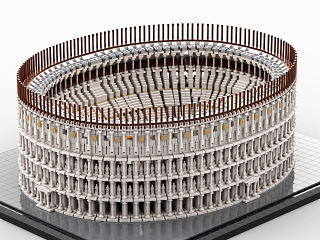 Italy has some of the most impressive architecture that can be found anywhere in the world (some of it dating back to the earliest days of Western Civilization). It is probably no coincidence that Italy is also home to some of the best LEGO builders specializing in architecture. Now two of these builders – Luca Petraglia and Antonio Cerretti have teamed up to form SPQR Bricks.

Their first collaboration so far has produced a custom version of the Colosseum. Unlike the official LEGO set of the Colosseum (that was recently released) which depicts this world landmark as it can be seen in the current day, the version that SPQR Bricks has created imagines the Colosseum as it originally stood back in the glory days of the Roman Empire.

I have been following (with great interest and admiration) Luca and Antonio’s work on Instagram for a while and so it is quite an honor to have them as guests on this blog. Thanks again Luca and Antonio for agreeing to answer these questions !

1) I know most of Luca’s models so far have focused on Italian landmarks that were built much later in history than the days of the Roman Empire that the name SPQR refers to. Antonio on the other hand has done builds depicting structures from Ancient Rome. What led to you both deciding to collaborate on some LEGO builds?

We have known each other for some years now and it did not take us long to discover that we share the same vision of building with LEGO bricks. We have the same passion for detail, for architecture and especially for challenges, and so it was natural for us to decide to collaborate. We are also very good friends and that makes it so much more interesting and fun.

The construction of a model of the Colosseum had been in our plans long before LEGO announced the release of the official set. We have worked on several projects, even more demanding than the Colosseum, but for various reasons we didn’t get a chance to realize this particular model until recently.

As for the use of white, if you look at the part of the Colosseum that is still intact, you can easily see that the color is much closer to white than to tan. Furthermore, all historians are sure that the facade was made of Roman travertine, which has different shades of white.

3) What kind of research did you need to do to figure out the original structure of the Colosseum and all its details with some historical accuracy? Clearly time has taken a toll on the structure and the ruins that remain now only give us a hint of the glory of the Colosseum as it was originally built.

We drew on different sources, both on the internet and in print, and we also visited the Colosseum to ensure that our model would represent the original structure as closely as possible. But we were also aware that the relatively small scale of our model would force us to make some compromises.

Some have pointed out that we have not used any colors in the corridors. But at this scale it is practically impossible to do a 100% faithful reproduction. Also, no one really knows what colors were originally used and how they were arranged and so to avoid making a mess we decided to opt for something more elegant and clean. In any case, we are extremely satisfied with the result.

4) I have not had a chance to study the instructions of the official set versus your version. Did you go with the same scale? Was your model influenced in any way by the official version ? While it sounds easier to build a complete, symmetrical structure than it is to recreate the ruins, I am sure your version had its own unique design challenges. Can you comment on that?

The scale is not the same as the LEGO set which uses the 1×4 arch piece as it’s basic unit. We have not studied the LEGO set either, but any similarities in the techniques used are purely coincidental. In fact, this project is based on a draft of a microscale amphitheater that Antonio had done well before the official set was released. We adapted that design to make the Colosseum with the 80 arches per floor that it had at the time of its greatest splendor.

5) I know you are offering instructions for your version of the Colosseum on Rebrickable. Have you also built the whole thing for real? If not, do you have any plans to build it eventually?

For now we have only built the model digitally, but we will surely build it using real bricks at some point soon. We may even build two – as a symbol of our collaboration.

Unfortunately, the virus prevents travel and at this time it would be quite difficult to build something together. That is why we decided to only publish digital renders for now.

6) I am assuming that you plan to continue building other structures from Ancient Rome (whether they still exist in some form or not). Is there anything specific you have in mind for your next build?

We are already publishing other models, and all of them will connect with each other and with the Colosseum, to create an ever larger and more complex diorama. In particular, we can already announce the publication of the instructions for LEGO models of the Temple of Venus and Roma (the largest temple in Imperial Rome and one of the largest of antiquity) and of the Basilica of Massenzio (sections of which have survived to this day).

7) You are probably familiar with Rocco Buttliere’s amazing microscale recreation of Imperial Rome. It is clearly unrealistic to do that whole thing at the scale you are using for the Colosseum but maybe you can try to do some key sections of Imperial Rome? It would be something to put on your to-do list right after Luca finishes building the entire Piazza del Duomo, ha ha …

We know the work of Rocco Buttliere very well. He is a master of microscale construction. His reproduction of Ancient Rome is fantastic but the scale he used is really small. Our scale being a little bigger, will allow us to include more details. With our project we want to cover as much of Ancient Rome as possible – probably even more than what Rocco did.

Piazza del Duomo will take a long time and of course a lot of bricks, but who knows, maybe one day we will be able to finish it.