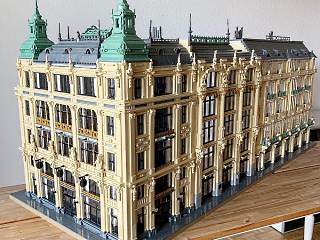 One of the great things about being an AFOL is that you belong to a community of builders from around the world who share the same hobby as you. Although our paths may never cross in real life, there is still a sense of camaraderie among us AFOLs on the internet (especially on social media) with all of us supporting each other’s work and of course learning from each other.

Nearly all of my LEGO models have been based on American skyscrapers and yet I have found a lot of inspiration in the work of my guest Michael Haas who is based in Germany. His models of classic European buildings are often stunning to behold – with a level of facade detail that you would not believe is possible with LEGO. It’s no wonder that he has become one of the most popular LEGO builders on Instagram. Michael was kind enough to agree to answer some questions for this post and it is definitely a great honor to have him as a guest on this blog !

1) It is clear from your work that you are passionate about classic European architecture. There is probably no shortage in Germany of these amazing buildings to draw inspiration from. How do you pick the buildings that you would like to convert to LEGO form ? As I understand it, some of your models have been based on buildings that no longer exist.

Yes, indeed here in Germany there are many examples of great old architecture – especially in Berlin where there are a lot of amazing buildings. What inspires me the most are commercial-use buildings. Around 1900 there were a lot of big so-called “warenhäuser” (department store) buildings that were built. There were two big players – one was Wertheim and the other one was Tietz. They had a battle going on to see which would have the bigger and more beautiful department store. The results were these amazing commercial cathedrals, which sadly don’t exist any more. But smaller commercial-use buildings are also super interesting for me. Of course I always have a look, to see if they can be built with LEGO but mostly I go with the ones that suit my taste, ha ha.

2) Once you have selected a building, what is your process for designing the LEGO model ? Do you use sketches or any other methods to plan out your builds ? Also, how do you decide how big to make the model in terms of studs ? Do you try to use a consistent scale for all your models so you can eventually combine them into a street layout ?

Once I select a building, I start building the model from scratch. I use the minifigure scale for all my builds, so that I can combine them. A dream of mine is to have a complete street view. Sadly I don’t have space for such a street or should I say thank God, because that would be my financial ruin. But thanks to you, I found my way to stud.io (which I can use to do virtual builds) and so there are no limits any more on what I can build.

3) You are a true master at replicating the wonderfully detailed facades that these older buildings have, using LEGO – a medium that is not particularly suited to this task. How do you go about figuring out the best combination of LEGO pieces needed to achieve each of the details ? Is it a fairly intuitive process for you or do you have to go through a lot of trial and error before you settle on something you are happy with ?

Thanks so much for the compliment. I truly believe that anyone can achieve this by trying and not giving up. I started building with LEGO only three years ago (and never played with LEGO before). If I could do it, I am sure that everybody else can do that as well. I always study the details from photographs of the building I want to build, and then I try to join the bricks until I am happy with the form, proportion and the overall look. If it doesn’t look right to my eye, then I redo it until it is perfect for me. This can be very time-consuming sometimes but for me it is like meditation. That is the whole reason why I started building with LEGO.

4) Do you ever find yourself frustrated by the limitations of the LEGO medium ? Maybe you have a building in mind that you would really like to create a LEGO version of (but haven’t been able to, because there is no easy way to replicate a certain aspect of the building using LEGO) ?

Yes, indeed my biggest challenge is to create corner buildings with round corners and beautiful, realistic towers. I am too obsessed with getting the details and proportions right and with the limitations of LEGO, it is too difficult to create the kind of build I would like to have. It really frustrates me. So I don’t even start building any models of corner buildings, because I already know that they wouldn’t meet my expectations. Do you know what I mean? And what’s even more frustrating for me is that the most beautiful old buildings were the corner buildings.

5) Have you ever taken your models outside your home ? Do you have any interest in displaying them in LEGO conventions ? Is this a consideration for you when you design your models (making it easy to separate them into sections and to transport them)

No, I never showed any builds of mine outside of my home, because I am new to the community. I usually am not aware of where and when the conventions take place and by the time I find out, it is too late. I have also not considered attending conventions because of the limited amount of free time I have (with my job) but I would definitely love to, in the future.

6) I know that you have recently started doing digital builds in stud.io. How has that experience been ? Do you find building digitally to be just as fulfilling as it is to build using real pieces ? Do you have plans to convert any of your digital builds into real ones at some point ?

Oh yes, as I mentioned before, I love to build with LEGO digitally. It opens up so many possibilities, because you have an unlimited number of bricks you can use. You can easily change the colors for the bricks that you want to use even if they don’t exist for real in those colors. It’s really great to plan and build with stud.io. As you can see in my Instagram posts for the last few weeks, I have been using stud.io constantly. Maybe in the future, when I am retired and LEGO releases a 3D printer that you can use to print your own bricks, I will build all these models using real bricks.

7) Your models occupy a small niche within the LEGO hobby (just like my skyscraper models). Do you have any interest in exploring other kinds of LEGO builds ? If so, what other kinds of models would you like to try building ?

That is a very good question. Hmm …. I would love to build a skyscraper model like you but at a much bigger scale. That way I could dive into the details like I do with my “normal” buildings. For example I would love to build the Woolworth Building in New York with such details (both on the inside and the outside).

Thanks again Michael for taking the time to answer these questions ! I am looking forward to seeing a skyscraper model from you some day, with the stunning level of facade details that we have come to expect from you.